Irrational Complexity to the Detriment of Stakeholders

Attorney Emily Spieler and retired Rutgers University professor John Burton had published in the American Journal of Industrial Medicine in January an article entitled, "The Lack of Correspondence Between Work-Related Disability and Receipt of Workers' Compensation Benefits," basically concluding that workers' compensation doesn't do its job anymore.

"Injured workers are facing complex systems that are not providing benefits for all work-related conditions," they said. "The current system is irrational, at best, and unjust at worst."

Burton is well known to the workers' compensation community, having taught about this social policy system for many years at Rutgers and having produced much of the nation's public policy research.

Spieler is probably less well known, but has impressive credentials starting with Dean at Northwestern School of Law.

Both have spent the majority of their professional lives providing research, insight, guidance and policy recommendations about workers' compensation.

Everyday I read about some complex issue in workers' compensation that, to the uninitiated, would seem like splitting hairs and would be technically irrational to the general population, providing ammunition to the author's conclusion of irrationality and unjustness.

For instance, in this morning's WorkCompCentral news there is a story about a Florida case from the First District Court of Appeals making a distinction between "essential" hypertension and "arterial" or "cardiovascular" hypertension relative to whether a police officer could claim a presumption of occupational causation.

Without professional guidance would the average police officer even know the difference, let alone know that there was a presumption of causation? I doubt it.

Spieler and Burton in the study suggest that additional protection for injured workers against retaliation for injury reporting and programs to reduce "stigma" associated with injury claims could help increase participation in workers' compensation systems by workers with industrial injuries who otherwise would seek treatment through other channels.

Another example was in this morning's news reporting a case where a UPS driver sustained a work injury and was released to work by his treating physician with various restrictions. According to the case history, his supervisor reacted angrily upon learning of the worker's injury and refused to honor his medical restrictions, and that the supervisor was overheard telling someone in the UPS human resources office that the worker was feigning his injury and making a false workers' compensation claim. The dispute escalated to the point where the worker made a Department of Fair Employment and Housing complaint, obtaining a "right to sue".

Every year I am tasked with lead editor of our California Flowchart. I started this project before I started WorkCompCentral. The original excuse was to promote my law practice but the reality was that it was just a challenge. My thought was that there WAS some logic and rationale behind the system's laws that could be followed making it more understandable. I estimate the original Flowchart took me about 6 months of part time editing, mostly between 2 and 5 in the morning every single day, to produce.

That Flowchart was significantly less complex than the present day Flowchart (sold out...): 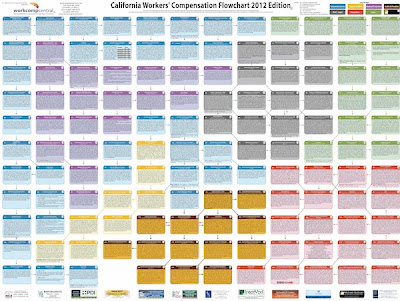 
And the Flowchart still does not have everything there is to know about the path a claim can take in the California system - there are just too many variables introduced from one reform to the next.

Indeed, Spieler and Burton state that decades of state amendments to workers' compensation laws passed since the late 1980s have tightened rules and limited compensation for workers.

The primary focus of those reforms has "consistently been on costs to insurers and employers, rather than on adequacy of benefits to workers," according to Spieler and Burton, though some changes did include provisions some would consider protective for the employees.

The authors call the issue of causation "a key pivot point" to closing the gap between the numbers of work-related medical conditions and those addressed in workers' compensation systems.

"There is no reason to link access to adequate health care to the cause of a medical condition," the authors wrote. "We wonder whether it's appropriate to have a social insurance system that is linked to proof of causation at work, given that the effects of work disability affects workers equally, irrespective of the etiology of the disability."

I find this statement very interesting in light of the present challenge pending before the United States Supreme Court as to the Constitutionality of the Affordable Care Act, aka ObamaCare. A decision and opinion by the Court is anticipated to be released in the next couple of weeks. Certainly any decision about the Affordable Care Act is going to impact workers' compensation as a subset of general health care because if the individual health mandate is upheld it would seem that the need for a separate medical system, i.e. workers' compensation, would be reduced or completely nullified.

For decades legislators have debated about the costs of workers' compensation and in my opinion that debate is misdirected. The debate should be about stability and ensuring that the single greatest privately funded social benefit system in the world operates to ensure that all employees have access to adequate medical care and financial protection against a ruinous situation.

Spieler and Burton seem to agree but they don't have the argument quite right.

The questions and concerns of today that are forcing notable percentages of injured workers to seek treatment and help outside workers' compensation systems, they say, should be approached "with a human rights lens" that "thrusts the injured worker to the center of the debate and de-emphasizes the effects on employers or insurers."

Take "employers" out of the above sentence and then the statement is correct because ONLY workers and employers should be in the discussion about workers' compensation. Everyone else, including the insurers, are just profiteers. Maybe necessary profiteers, but profiteers nevertheless.
Posted by Unknown at 4:33 AM