Paid gross premium (no adjustment for reinsurance, dividends, experience, etc.) by carriers in the Golden State totaled about $10.4 billion in 2011.

Compare that $10.4 billion taken in with what was paid out: $3 billion for indemnity; $2.6 billion was for "incurred loss adjustment expenses" ("the full cost to insurers of administering, adjudicating and settling claims" which include defense attorney fees) and about $4 billion was for medical treatment (deducting $311 million for medical cost containment and $174 million in medical-legal expenses from the total of $4.4 billion in total medical losses paid).

Defense attorneys took out $715 million, or about a quarter, of all loss adjustment money.

Applicant attorneys took out about $387 million from indemnity leaving only about $2.6 billion in actual money going to the injured worker.


My friend and risk management consultant, Bill Cobb, made these nice graphs which depict the attorney fee comparison: 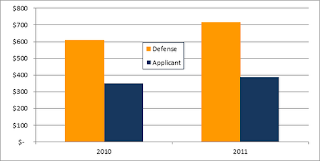 The WCIRB report finds that total paid losses in 2011 were $7.5 billion. This includes all insurer losses paid and insurer loss reserve changes that occurred during 2011, regardless of when the accidents occurred or to which policies these losses belonged.

I'm not saying that lawyers are not needed, nor that they are an unnecessary expense - I'm just pointing out a disparity in allocation of benefits...

Speaking of disparities, Medical cost containment has doubled since 2005. $0.4 billion went to cost containment services, leaving about $7 billion for injured workers to cover their medical and indemnity.

Let me summarize: carriers took in about $10.4 billion in 2011. Carriers sent $4 billion to medical vendors, and $2.7 billion to injured worker pockets. $1.1 billion went to attorneys. It cost carriers $5 billion to engage in this activity.

To put it more directly, carriers spent $5 billion in 2011 to administer $6.7 billion in benefits that inured to the injured worker.

Does this sound like a reasonable return on investment?

And the Brown Administration is bent on saving "costs" in the system to increase permanent disability indemnity benefits by going after lien claims and copy services?

To quote my sister-in-law when confronted by a child street vendor in Cabo San Lucas during a family vacation a couple years ago asking an inflated price for some trinkets, "Look at me ... do I look stupid to you? Do I?".