My Remedy for CA's "Lien Problem"

On Friday I asked a few rhetorical questions about the new lien regulations in California, mostly critical of the idea that the volume of liens is problematic and that they have resulted in more state wide regulations when the issues are geographically specific.

I've answered a few of my own questions after reading and re-reading the Statement of Reasons supporting these regulation changes and the actual text of the regulations.

First off, certain District Offices do indeed have a lien problem. This lien problem is that there is too much paper and too few resources to process that paper. This is not a system wide problem, yet it is resulting in system wide regulation.

The photo below was taken in 2010 of boxes of unfiled liens stockpiled at the Los Angeles office. From what I understand there is now about 425 such boxes awaiting processing in Los Angeles, Van Nuys, Marina del Rey, Long Beach, and to a lesser extent Anaheim and Santa Ana. 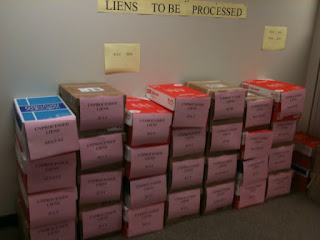 According to the California Commission on Health and Safety and Workers' Compensation (CHSWC) Liens Report dated January 5, 2011, the electronic entry of liens constituted only 14% of all liens entered into the system in 2009.

I don't know what the number is presently but based on the estimate of 425 such boxes the ratio of electronically filed to paper liens probably hasn't changed much.

Listen - what's wrong with this picture is that the State is having to do the work of lien claimants and it is taking up resources that are barely adequate for resolving cases in chief.

And guess what lien claimants - you're not likely to get paid until the case in chief is resolved!

So my remedy is simple, quick, efficient and probably illegal: If it were up to me, I'd shred every single last one of those pieces of lien paper and tell lien claimants to search EAMS to see if they are in the system, and if not then get either an EAMS i.d. and file electronically or go through a third party vendor to get the job done rather than burdening the rest of the workers' compensation system with increased regulation.

(Parenthetically, this "lien problem" didn't exist when lien claimants were able to file using EDEX, so some of the blame needs to be shared by the Administration's decision in 2008 to eliminate that data input option - but that's past history.)

Now, let's move on to another issue and that is "dormant liens". These are identified in the Statement of Reasons as to the necessity for new regulation section 10582.5 that permits the dismissal of liens where there has been no prosecuting activity.

Because the Administration is concerned with everyone's legal rights and remedies, we now have a complex, albeit presumably legal, method of getting the dead weight out of the system. But because we are so concerned with due process the steps needed to get rid of this dead weight requires lots of notice, objection, hearing, etc.

To me this seems just plain unworkable given the present structure of the Board.

In addition I have heard grumbling that some lien claimants are spooked and are going to mass file Declarations of Readiness (DORs) to make sure that they are in good prosecution standing so their liens aren't subject to summary dismissal. Take that with a grain of salt - I don't know that will come to fruition and even if it does then at least the DWC can identify cases and liens that are active and can discriminate in favor of leaving those liens alone.

We (I use that in the "royal" sense) have spent over $60 million for a computer system that was supposed to provide us with extraordinary reporting capabilities. It seems to me that if this computing system is worth its weight in data then DWC IT personnel could easily query the system for all cases that have been settled or on which awards have issued and that still have liens that fall within the definition of "dormant." The DWC should then set up a special "dormant lien" processing unit which sends out the dismissal notices under 10582.5. Objections are then set for hearing before a special lien officer who can then deal with the lien on its merits, if there are any.

Maybe the DWC and WCAB already have a plan like this in the works - there is sort of a special lien processing unit at the Oxnard district office to handle the overflow from Los Angeles, but it is not a dedicated unit. I'm proposing a single dedicated unit centrally located with the staff to churn through this dead weight as efficiently as technologically possible. Many lien claimants are using technology to more efficiently file and process their liens and requests for hearings so the DWC should do likewise in the elimination of this dead weight.

Okay - now "zombie liens." For those of you unfamiliar with the term, "zombie liens" are liens that are still on record which essentially have been abandoned by the owners because they have been paid whatever they felt was reasonable on the underlying bill and which have not been dismissed, withdrawn or otherwise dealt with. Then what happens is some enterprising persons discover these liens and make investment vehicles out of them, extorting money out of carriers who find it too costly to fight them and providing the former lien owners with a couple extra percentage points of recovery money.

These tactics are, in my opinion, just plain wrong. Liens are not investment vehicles. They largely exist for one primary reason - to ensure that injured workers receive some medical care if the claim has been denied and the claimant's attorney and physicians believe there is some merit to the claim.

"Zombie liens" are part of the reason for the addition of 10582.5 and amendment to 10770. The act of using liens as an investment vehicle needs to be strongly discouraged. That is accomplished by sanctioning those who resurrect the zombies. There should be no allowance at all for the sale of liens. If you are not the owner of a lien then you can not collect on it - period. The only exception would be if the original owner went out of business and the sale of accounts receivable was part of the estate liquidation. Even then, there should be a new lien filed with a declaration under penalty of perjury as to the facts reflecting the liquidation (section 10770(c)(2) was amended requiring a statement as to ownership of the alleged debt - this needs to be rigidly enforced).

I know that draconian method is not presently available under the Labor Code - fine. Next best thing is that those matters are handled by the special lien officer (a WCJ with the jurisdictional power to sanction or otherwise penalize ne'er-do-wells) with fat fines for bringing zombies to life. That practice will cease in short order.

Last order of business - I don't know if this is representative but if it is, then it is troublesome to me: At least at the Long Beach office lien conferences are now being set into January 2013, more than 6 months away. Two obvious problems with this are: a) the file remains open at least 6 months too long, and b) this is still a burden on the Long Beach office and necessitates time and resources that should be used for other things. Nonsense!

The Labor Code allows for "liens against any sum to be paid as compensation" (LC 4903). The ONLY way to effectively deal with lien issues in the future is that the case can not be resolved in a bifurcated manner. That means that the litigants are going to have to deal with liens on the front end rather than after the injured worker has received his or her compensation. This does not require any special law or regulation - workers' compensation judges can simply refuse to bifurcate lien issues. If a lien is in the way of a settlement then the case is set for trial and EVERYONE appears for a big, consolidated hearing.

Will this delay the resolution of cases in chief to the detriment of injured workers? Perhaps. But only for a while - eventually the culture will change, people will figure out that in order to get timely settlements or awards they will need to take care of business on the front end. And this will also probably curtail other nefarious practices such as trying to boost a claim's value by referring to other physicians for "specialty diagnosis" resulting in the addition of body parts.

This is not a proposal that will sit well with the applicant's bar, but in this complex system everyone that participates has an obligation to make the system work. Smart lawyers will figure it out and implement systems to take care of the resolution of liens efficiently. The others will leave the practice.

There you go. I'm done with this lien nonsense. Let's get cases resolved and the California work comp system working as intended.
Posted by Unknown at 3:25 AM