Over the past weekend the Los Angeles Times published a startling investigative story on Purdue Pharma, the maker of Oxycontin, and everything they knew about illegal distribution of the drug, their investigations, their suspicions ... and the company's complete lack of communication with anyone that could put a stop to the company's $31 billion revenue stream from the nation's best selling opioid.

How much did Purdue know?

And how much did they keep to themselves ... until pressured by law enforcement and the government?

According to the story, since 1999 more than 194,000 people have died from opioid overdoses, and more than 4,000 per day become addicted. 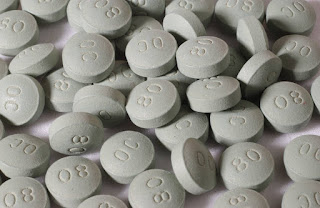 Yet, even after three of Purdue's executives pleaded guilty to federal charges of misbranding Oxycontin and the company paid $635 million in fines and fees, the company turned a blind eye to clinics they knew were overprescribing, and even fronting criminal enterprises, all after touting increased security and controls over their drugs.

One year after the settlement, a Los Angeles pain clinic, Lake Medical, opened its doors on the license of Dr. Eleanor Santiago, a physician who had fallen on hard times and whom the operators of Lake Medical recruited to write prescriptions.

Santiago wrote 1,500 prescriptions for the pills in a single week - more than most pharmacies sell in an entire month; and according to the story, in October of 2008 she prescribed more than 11,000 pills.

Purdue investigated and concluded Lake Medical was part of a criminal enterprise working with a pharmacy in Huntington Park.

“Shouldn’t the DEA be contacted about this?” the sales manager, Michele Ringler, told company officials in a 2009 email, according to the story. She opined certainty it was an organized drug ring.

Still, Purdue didn't take any action against Lake Medical, and didn't tell anyone about what they knew until the clinic went out of business and its leaders indicted.

According to the LA Times, Purdue had collected exhaustive evidence suggesting criminal distribution of the drug, and not only did not share that information with law enforcement, but kept selling the drug to those being investigated.

"Purdue knew about many suspicious doctors and pharmacies from prescribing records, pharmacy orders, field reports from sales representatives and, in some instances, its own surveillance operations, according to court and law enforcement records, which include internal Purdue documents, and interviews with current and former employees," the Times says.

Since 2002 Purdue had been keeping a list of suspicious doctors, and the Times investigation revealed there were 1,800 names on that list.

Only 8% of them were reported to law enforcement.

Rather than risk its interfering with the obscene profits Oxycontin was delivering by releasing its information, Purdue instead came out with a tamper-resistant formulation. It was only after many arrests had been made that Purdue supplied its "suspicious" list to the DEA - by that time it was old news; many on the list had already been arrested.

The Times investigation and the resulting story are hugely incriminating. Big business making big money off of ... big business, when put into the context of the workers' compensation system.

The issues with opioids in workers' compensation are well known, the accounts well documented.

The harm to lives, families, business is huge.

Suffice to say, the industry has probably supported, to its detriment, Purdue to the tune of billions of dollars, directly and indirectly.

Many states have sued and settled with Purdue, but those suits were based on the company's labeling misrepresentation.

It seems to me, that the workers' compensation insurance industry (and self-insured employers along with them) have some leverage in the form of a class action lawsuit to recoup much of the damage Purdue caused by its fraudulent activity.

And it IS fraud! Knowingly concealing information that causes harm and damage to others is just as bad as misrepresentation.

Jack Crowley, who held the title of executive director of Controlled Substances Act compliance at Purdue and had spent decades at the DEA, told the Times, “Well, once we start to learn about it, we’ve got to report it. That’s for sure.”

Pretty much a slam dunk to my jaundiced work comp "no fault" legal mind.

If any carrier wants a referral for a class action law firm, contact me...
Posted by Unknown at 4:04 AM