My last post before the holiday weekend was "Broker Schmoker."

The theme was just because a broker (or for that matter a lawyer or risk manager) was involved in the configuration of a work comp program for an employer with 500 workers and a $20 million payroll, doesn't necessarily mean that issues of deceit, corruption or cheating could be discounted.

My post was in response to the news that pending before the California state legislature is AB 1922, by Assemblyman Tom Daly, D-Anaheim - the insurance industry's answer to the Equity Comp scandal, where Berkshire Hathaway subsidiaries, California Insurance Co. and Applied Underwriters Captive Risk Assurance Co. were ordered to cease and desist from selling the program because contract documents were not filed with, nor approved by, the Department of Insurance. 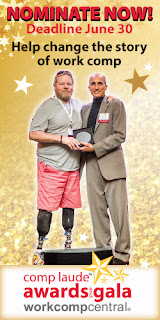 My viewpoint is based on personal experience in the work comp industry negotiating coverage for employers, from the earlier bid rigging scandal, from the all too often news story of a broker stealing a client's money (by failing to pay it to the underwriting carrier), and news of other nefarious dealings where fancy terms were used to hide risk transactions to escape DOI scrutiny.

"Broker Schmoker" touch a couple of nerves, and sent one insurance agent over the top. He protested to my post by canceling his membership to WorkCompCentral.

So I asked him to give me his viewpoint and state his case. And he did!

But, it turns out that my post was just the tipping point. This agent had taken one too many punches from the media and was done with it.

Here's his response, edited to eliminate personally identifiable information since I don't have his permission to publish it (I asked but he had already taken off for a vacation).

See if you agree:

Thanks for reaching out.

I will be brief for now, as I am cleaning up a few things, and adding a few days off to the long weekend.

First, on the Equity Comp issue ... my opposition to the selling this product is well known in the agent community that I serve.  But, probably not for the same reasons that the Insurance Department of California is asserting.   Have you read the Equity Comp contract?  If so, I suspect you could find countless issues to write about before you get to agents.

On the issue of agents, your blog may have been the tipping point.  Agents have been getting dismissed or criticized from the work comp blogosphere and elsewhere.  In just the past few weeks, Bob Wilson posted that, "most agents are more interested in getting the best doughnuts at the Chamber of Commerce  breakfast."  His perception of agents is probably why not a single current or former agent was invited to join the "National Conversation" on work comp.  In my opinion, excluding agents was not only ill informed, but creates barriers to achieving the group's objectives.

Then, I noticed that the WCI 360 "Agent Track" in Orlando next month does not have a single current or former agent presenting.  They put NCCI in charge of managing the "Agent Track."  That decision exemplifies the lack of understanding of agents and the work they do.

And, Mark Walls is going to give the "State of the WC Market" to an agent audience at the conference.  What does he know about the role and responsibilities of agents? Agents will care about how the State of the Market affects their client and their agencies.  Not as he mentioned in a May, 2016 Insurance Journal article on the State of the WC Market, "employers with good loss control and return-to-work programs will find more insurance companies wanting their business."  Agents know that already, and don't want to pay money to hear that dribble.

So, "doughnut eating, commission" hounds in combination tweaked me, and precipitated an "enough is enough" position.  Yes, I stipulate that there are some bad agents, just as in any profession. However, too many Bloggers, some of which have never actually done anything in the work comp field but browse the internet, copy material and paste it elsewhere, and attend conferences, are trashing or dismissing agents, which I find offensive and just plain wrong.

Agents have two national associations along with 50 state chapters.  It is long past time for the associations to redeploy some of their resources and push back against the bloggers that don't understand agents and trash them.  In addition, almost every employer has an agent, but not very many have a Blogger, "Thought Leader" or social media maven to assist them.  Agents need to get engaged and point out that many of those who are criticizing them are just empty suits and talking heads that have never sat across from an employer with serious and complex problems.  Or, managed those complexities and assisted business owners to avoid financial devastation.

Taking agents out of the loop takes away a resource that can't easily be replaced.  Perhaps, the Blogger community can hit the streets and get engaged with employers where the hard work gets done.  However, I suspect it is far easier to talk about what needs to be done than to actually do it.

So there you go - agents in general do good things for their employer clients and the workers of those businesses, which is why you should nominate agents and brokers who do good for a Comp Laude Award.

What better way to tell stories where agents and brokers have prevented financial devastation?

Nominations have been extended to July 10, so to paraphrase the B-52's "Butter Bean": "don't you wait, don't you linger, Comp Laude will slip through your finger!"

For the record, I don't work in my underwear and don't like Cheetos...
Posted by Unknown at 4:03 AM