Stop Whining, Do Something

The Labor Day holiday weekend gave me a couple extra days to think and write - excuse the length of this entry.

My post, "The Word Didn't Get There," generated a lot of commentary. Some agreed with the post, and some disagreed.

Several said I need to stop picking on the insurance companies and claims administrators, some wanted to know more information about who, what and when, presumably for some legal attention.

One person even said they were going to cancel their WorkCompCentral subscription because I was being too hard on insurance companies.

And some said I was being too soft - that quite simply the insurance or third party administrator folks are just capitalists doing their jobs maximizing profits for shareholders so they're not to blame; and they're also not to be relied upon for corrective leadership either.

"You can stop bitching at the professionals that participate in the System to ‘do better,'" I was told. "They are all Capitalist and their job is to maximize their profits. It is the job of the government to regulate what is ‘fair and reasonable’."

On the heels of that, another insurance professional contacted me to point out that a big travesty of the workers' compensation system is how the law permits the shifting of system liabilities on to greater tax payer funded systems.

In California, for instance, there is a capitation on the maximum amount of temporary total disability time - in general it is 104 weeks (unless the injury falls within the statutory catastrophic categories).

I'm told, "the 104 week CAP from what I've seen is like a license for employers, carriers, and TPAs simply to refuse payment of benefits because - no matter what happens - the worst case scenario is 104 weeks of TTD.  Meanwhile, EDD [Employment Development Department for those not in California - responsible for administration of the state disability system] pays, followed by Social Security benefits."

According to this professional, "I've reviewed several cases on which the dates of injury are, at the very least, 5 years old and the applicant has been TTD for most of the time, beyond 104 weeks.  But who really cares?  Case denied (although ultimately found industrial) and still no payment of TTD because it doesn't matter - in the end, only 104 weeks will be due.  Meanwhile, injured workers are financially ruined, not to mention, suffering from the physical and in many cases, the emotional effects of their injuries."

Advocates and supporters of the insurance and TPA industries are going to say these are isolated incidences, and that the industry does a good job of ensuring compliance.

But why should there be ANY isolated cases? Just because we make mistakes?

The California Division of Workers' Compensation has an Audit Unit and each year they publish a report on the "success" of the industry to meet its obligations. But every year there is widespread failure documented.

You may argue that the term "widespread failure" is inaccurate. After all, the Audit Unit in its last report from 2012 reviewed 3,445 files resulting in 4,690 violations. Some of these audits are random but by regulation most audits occur via some complaint or because the subject failed an audit last time. There are penalties for failing to process a claim in compliance with law. But even if a penalty is assessed, it might not be subject to payment (sort of like getting a parking ticket that you might not have to pay). 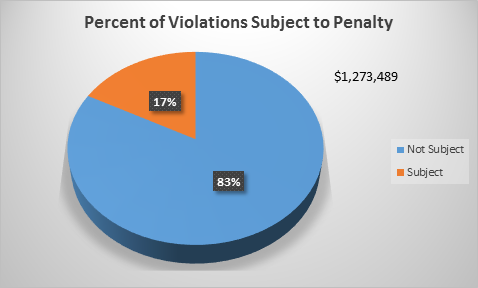 Remember that the $1.2 million in penalties was derived on a survey of only 3,445 files. To me, that's pretty significant. 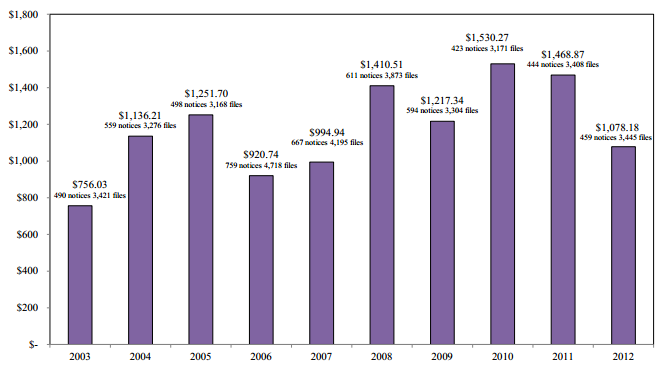 While we can't extrapolate the compliance numbers directly to the bigger picture because audits are triggered by regulation to occur on some earlier findings of misfeasance - not all audits are completely random as I noted - we can use these numbers for illustration of how big an issue this likely is.

Let's assume that the audit findings of unpaid/underpaid/late-paid indemnity is applicable to just 10% of all cases (which is likely too small from the anecdotes I get every day). In California nearly 500,000 new litigation cases are filed every year, and we know that quite often litigation is initiated because someone isn't getting their money, or isn't getting it in a timely manner...

And that $54 million obligation likely got pushed on to EDD and then Social Security.

A complaint I hear from the claims adjuster side of the business is that most of their claims handling experience is all compliance related - all of the forms, reporting, data inputting, crossing tees and dotting eyes, takes time away from the proper administration of claims.

But when I look at these kind of numbers, it seems to me that there isn't nearly enough emphasis on compliance.

And maybe the compliance burden is just an excuse. Maybe the truth is that the reason compliance is such a burden is because case loads are too high to do effective work.

I received a different email from yet another former claims adjuster, who is now going to law school. She relates a story similar to those above, where quality claims work is "rewarded" by the supervisor with case load manipulation so that the executives think the numbers are reasonable based on the case load report. But after the report was delivered the numbers were shifted around to punish or burden the adjuster.

Or maybe the manipulation was just to "meet the numbers" so the supervisor looked good to the executives.

This particular adjuster complained to upper level executives and to state officials (NOT in California by the way!), but the conduct continued. So she quit and will be a lawyer next year...

All of which makes me think that maybe government isn't doing it's job. Workers' compensation is for the most part a compulsory, mandatory system - enforcement therefore is the government's job.

I know I'm going to hear that 100% compliance isn't reasonable and is unachievable.

Industries all over the world seek and many achieve 100% compliance on a variety of service or manufacturing standards. The workers' compensation industry shouldn't be any different, and in fact, should be held to a more strict standard since it is the LIVES of PEOPLE that we are dealing with.

The flip side of the coin is, of course, that recipients can't be trusted either to report concurrent income, or go back to work timely, etc. But that's why we have certain systems in place and guidelines to help determine whether any particular individual is an outlier and needs to be treated differently, or be reviewed for potential abuse.

Here's a big problem with enforcement and compliance - fear of industry retribution. People on the front lines, the ones that are actually doing the work, want to keep their jobs. They are fearful of speaking out. These are people that are passionate about the mission of workers' compensation, and want to continue working in the industry.

I hate big government. I come from a perspective that reasonable people will behave reasonably and don't require Big Brother to keep them straight.

The reason insurance, and workers' compensation in particular, is so heavily regulated is because of the potential for harm and abuse is huge. Poet Oscar Wilde wrote, "I can resist everything except temptation." Temptation drives bad behavior. Regulators, i.e. the government, are there to protect the public from bad behavior - would it not be reasonable then to expect that government act more forcefully to trim temptation?

One person wrote me with what may be perceived as a radical idea - that all cases, 100% of them, be audited; that funding for this state action might initially cost about $50 million (hmmm - isn't that about what is probably being denied injured workers?) but after the industry adjusted to this oversight the cost would go down; and the cost would be funded by penalties that are ACTUALLY COLLECTED (i.e. mandatory payment or lose the license).

I'm not sure this is a workable idea, by the way, but the employer (that's right EMPLOYER) advocate that raised this idea insists that it could work and that it wouldn't have to be in place for long for insurance companies to understand that 100% compliance was compulsory, just like the rest of work comp.

Industry leaders over the past couple of months have been expanding on the idea that workers' compensation needs to rebrand itself in the public's eye if it is to attract new top talent from the millennial generation. The industry needs to be seen as helping others in times of need rather than as an industry or system that is antithetical to Robin Hood: take from the poor and keep it.

How is the industry to honestly promote brand identity of "doing good" when the actuality is far different? Do you think the millennial generation is that stupid?

100% compliance should be the goal of every claims house. Forced audit of every file could be a good mechanism if I thought that government could pull it off - but I don't have any confidence that would happen (brings to mind the phrase, "close enough for government work...").

Certainly, however, broader, stronger, and more effective auditing and financial penalties, up to and including revocation of insurance or claims administration licensure, should be implemented so the industry understands that government, The People, are serious about workers' compensation delivering the value that employers pay for, and workers rely upon.


So I did some quick research:

A prior study funded by the SSA concluded that various state WC reforms during the 1990s contributed to a 3-4% growth in SSDI payments.(http://www.ssa.gov/policy/docs/ssb/v72n3/v72n3p69.html)

In 2012 about 12.7 million people got SSD. 3.5 million got supplemental security income, and 1.4 million got both. The gross population for these benefits is 12.7 million.

For those ages 18-64 (i.e. our working age population) there were gross of 8.4 million WORKERS receiving one or both types of benefits, totaling over $13 billion dollars in 2012.
(http://www.ssa.gov/policy/docs/statcomps/di_asr/2012/sect05.html#table66)

So let's do the easy math - 16% of $13 billion means that work comp was successful in off loading it's indemnity obligation to government social programs to the tune of $2.56 billion dollars.

And we're going to argue about whether on not work comp does it's job????
Posted by Unknown at 4:56 AM