A Hailstorm of Remedy May Be The Only Alternative

Here's the weather forecast for today in Kailua, Oahu, HI from the National Weather Service:

Today: Frequent showers and possibly a thunderstorm. Some of the storms could produce heavy rainfall. High near 74. Breezy, with a east wind around 20 mph, with gusts as high as 28 mph. Chance of precipitation is 100%. New rainfall amounts between three quarters and one inch possible.

Indeed, as I write this post the lightning is constant and the banging of thunder nearly continuous. The rain hasn't started...yet.

Hawaii, which has seen more rain this winter than recent memory according to locals, is preparing for a major storm.

And that storm has the same qualities as the majority of workers' compensation storms across the nation: a sudden and meteoric rise in opioid prescriptions and abuse, out of control physician medication dispensing with some docs marking up prescriptions by 1600% (that's one thousand six hundred percent), pending legislation to dilute efforts to control these costs (and which may in fact increase costs), failures in return to work and, of course, the bogey man of all work comp systems, the threat of precipitous rate increases to account for all of this.

In talking with Hawaii administrators it becomes clear that the vast majority of excesses in the system are the result of a few "bad pineapples" taking advantage of a "soft" system for individual profiteering at the expense not only of society and the economy, but individual workers without regard to their well being.

The bigger problem with the bad pineapples is that their actions provoke legislative or regulatory action that affects all of the providers, all of the injured workers, all of the other system participants creating additional expense and burden for those who have respect for the rule of law.

This pattern is common through out all work comp systems. Nearly all states face these problems, some more acutely than others, and some, like California, in specific geographic zones.

Workers' compensation, being a product of legislative creation rather than an extension of common law, is uniquely subject to manipulation, on all sides of the table. The typical reaction to such manipulation is to attempt to refine the law with further legislation (we call that "reform") and regulation.

As we have seen, though, the legislative process is terrible at producing truly effective remedies because of the influence over lawmakers by those whose interests (bad pineapples) may be affected by the proposed refinements.

The only truly effective remedy is individualized enforcement. But doing so requires strength, commitment, resources. 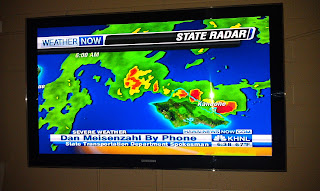 The rain has started, with golf ball sized hail, and flash flooding has started. See the graphic - red means BAD. The red is where I'm typing from!

And like the storm that is upon us as I type, hail and heavy rainfall from the maelstrom of litigation can be damaging and exhausting.
Posted by Unknown at 8:58 AM