CA Reform Should Not Be Just About Benefits

With all due respect to California State Senator Ted Lieu (D-Torrance), the issue behind the next generation in workers' compensation reform is not how to hold down costs to employers while increasing benefits to injured workers.

The real issue is stability and predictability.

Yesterday the Senate Committee on Labor and Industrial Relations and the Assembly Insurance Committee held a joint hearing on the impact of Senate Bill 899.

Intended as a “launching pad” for reform discussions, the hearing took in testimony from several people about benefits, costs, market rates, ratios, and other elements that go into "fixing" workers' compensation.

I think that administrative officials understand the issue.

Division of Workers' Compensation (DWC) Administrative Director, Rosa Moran, testified that the division is working with the Commission on Health and Safety and Workers’ Compensation (CHSWC), Rand Corp., and the University of California to discern how to “carefully devise a program that will improve compensation benefits to injured workers, but at the same time not create a volatile market.”

Moran understands the issue exactly - avoiding volatility in the market is the goal.

Rand generated a report in 2009 in response to a request by CHSWC about trends in the California system with 29 recommendations ("California's Volatile Workers' Compensation Insurance Market: Problems and Recommendations for Change"; Dixon, Macdonald, Barbagallo) that, in the opinion of the study authors, would return stability to the market.

Indeed, it wasn't that prices were inflating in the 2000s that led to the monumental reform action in 2004, it was that prices inflated much too rapidly and shocked the business community.

Think of gasoline prices, a much broader market and the subject of much public concern and/or consternation.

The market does not grumble about inflating gasoline prices. As long as the inflation is gradual people hardly even notice. One might hear some comment about how much fuel costs, but that conversation is typically compared to a much longer historical reference.

But when prices inflate suddenly there is a shock to the population and a general dissatisfaction overcomes the population with disparaging remarks about oil company profits, Middle East unrest, and calls for regulatory action.

The same with workers' compensation. The issue for business in any state is not really about how much a certain service or commodity costs, but whether there is stability in the cost so that an effective business model can be drawn and relied upon for decision making in the quest for a reasonable profit.

Rand notes that since 1995, "average premium per $100 of payroll has varied by nearly a factor of three."

Here's a graph from WCIRB data put together by an insurance brokerage unrelated to the Rand study: 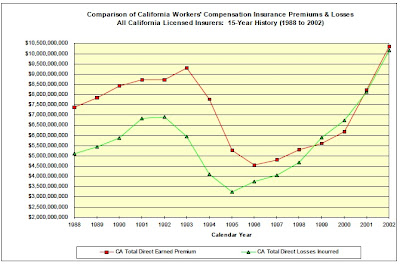 The point of this graph is that prior to "open rating" (i.e. SB 30 passed in 1994, effective 1995 that removed direct Department of Insurance rate regulation) there was fairly good separation of earned premium against incurred losses. Around 1999, as the folly of the reinsurance scandal (known more commonly as "Unicover") and Managing General Agents came to fruition losses increased dramatically, carriers failed, capacity dried up, forcing premiums to skyrocket.

Since 1995, Rand notes, "While it is true that the volatility and insolvencies were due to a number of factors other than price deregulation, it should also be acknowledged that price deregulation created an atmosphere that exacerbated the adverse effects of several factors."

Rand says that the market seems to have learned its lesson and that the confluence of events that led to the 1999 malaise was unique, but "memories are short" and "and many of the same incentives, institutions, and regulatory practices that led to the volatility and insolvencies remain in place."

The point of this short review is that the current talk of "reform" is all about the benefit delivery system, but there is almost no talk about the underwriting market - what we tend to forget in workers' compensation is that while costs are important, to the business owner it is not the cost of indemnity, the cost of medical treatment or rehabilitation. It is the cost of the premium that counts.

While the Rand report authors do not recommend a return to the minimum rate regulation system that was in place prior to 1995, they do recommend tighter regulatory control over the underwriting market as a part of an overall "reform" in order to bring stability back to premium costs to employers.

There is neither the time nor the space in this post to go into any great detail about increased regulatory oversight in the underwriting market.

But it is my opinion that the benefit delivery system can not be the sole purview of true "reform" and that the underwriting market must also be a part of any broad discussion.

And I believe that the discussion should not focus on "costs" as typically understood, but should focus on volatility versus predictability.

The issue is not how much the system costs, but the value of the system. In a mandatory participation system like workers' compensation, predictability is where the value lies.
Posted by Unknown at 4:47 AM