An interesting realization came to me lecturing at the American Academy of Orthopedic Surgeons Workers' Compensation Course this past weekend - debating how to get the patient better, to return to work, to obtain the best outcomes medically, and all of the rest of the banter has nothing to do with making workers' compensation actually perform the way it was designed. These are doctors that really care about what they do in work comp and they get frustrated because they are scientists and linear thinkers, and they have a difficult time accepting areas of gray (e.g. "lighting up" a pre-existing condition).

I talk with a lot of them and, like many in the industry, they believe that workers' compensation is a broken system rife with fraud, dereliction and dysfunction.

The truth of the matter is that, while workers' compensation isn't the most efficient and functional system in the world, it has the ability to perform just fine if we allow it to. But it seems to me that in our quest to do the best job that each of us has been assigned, we forget the how and why of work comp.

It all comes down to understanding capitalism and its relationship to labor.

Capitalism is the act of gathering up money, investing money into a business idea and then hopefully getting a return on that money.

Labor provides the means by which capitalists are able to obtain a return on investment. Without labor, machines don't run, design doesn't occur, trenches don't get dug, trucks aren't driven. I use labor in the broad sense - each person that works provides a service, labor, that allows things to get produced and services to be provided.

And just as labor provides the means for capitalists to get a return on investment, capital provides a means by which labor is able to eek out a living - usually.

Don't confuse the capitalist with the employer - they are two different things. The employer is the mode by which deployment of capital occurs; the conduit by which money is managed through labor (and "hard" assets) to build the widget or provide the service.

While the economics of work comp are a bit more complex than this simplistic view, as long as the roles are understood it really is pretty simple.

First - employers do not pay work comp premiums. Employers collect work comp premiums from consumers of the services or products that are the product of capital and labor by adding the cost into the price of their product or service. 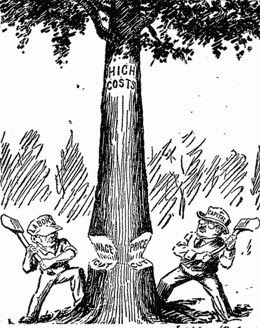 For the average employer, it is a zero sum game. For the employers that are really bad at managing their work environment it is a good deal more punitive. They may argue that work comp premiums drove them out of business but I'd guess they were really poor businessmen and there were a dozen other things that contributed to their demise.

And I don't buy that workers' compensation drives business under ground. Contractors for instance have a whole host of employment related issues that influence under the table compensation to the workers, not the least of which is culture, which is tied to greed, which is the product of ...

And I'm not going to discuss that work comp is a government mandated social contract here. We've covered that topic many times before. Suffice it to say, 'It exists - it is the Law' - just like traffic laws, tax laws, and environmental laws. I don't hold much hope that the legislators will figure out how to craft more laws to have an effective and fair system. They have been at it for 100 years and one could argue it's worse now than when it started.

Karl Marx' "Das Kapital" should be required reading for every economist, legislator, and business owner. His text clearly defines capital and labor in great detail. He states that without Labor, Capital is dead. Without Capital, Labor cannot subsist (at least not since the Hunter-Gathers 300,000 years ago).

The combination of Labor and Capital is designed to produce a Surplus (after the return of Capital and paying for the subsistence of Labor). Where we in America take issue with Marx' work is that he believed Surplus should be distributed to Labor. Obviously I, and most Americans, disagree.

A friend of mine did a study of the Fortune 500 - arguably the largest concentration of employers - a while ago to figure out this relationship between Capital, Labor and Surplus. Here's how the numbers break down: Before one employee can come to work (and run that drill press or whatever) some Capitalist has to put up $127,000 in capital. Of that amount, 57% is equity and the other 43% is borrowed.

At the end of the year, the employee has had guaranteed wages and (hopefully) some benefits. The Capitalist has, on average, earned around $2,400 per employee for his efforts. This compares to the average wage of $50,000 plus for the worker. Of course those numbers are generalizations and are a blend of some making much more and some losing a lot more.

Don't get me started on Management compensation. A) They are not the Capitalist, and; B) Their conduct and compensation has the implicit approval of those who are the Capitalist - not to mention the legal mandate to maximize the profits of the shareholders provided it is within the Law.

All these arguments about how the work comp system is broken and it is Corporate America's fault are nothing more than Red Herrings. The simple fact of the matter is that the behavior of people, and remember corporations are people (the United States Supreme Court told us so!) is what we have a problem with.

Whether that behavior is reasonable or not is balanced by what the Law says is reasonable, and when the Law doesn't tell us what is reasonable then we are left to our own ethics and morals.

Sometimes, as we all know, ethics and morals don't necessarily align; some folks have looser standards than others, some have tighter standards, and these are all tempered by what is demanded of each of us within all of our respective jobs.

It's time for us all to "Man Up" and take responsibility. The system isn't broken and it doesn't need to be fixed (God save us from another round of legislation designed to fix the system). Work comp is an Administrative system and it has rules and regulations. For the most part, those rules and regulations are designed to protect both the injured worker and the employer equally.

Is the clerk at Walmart slow and incompetent? Perhaps! But, that's where you go to buy things and despite the inconvenience or frustration you buck up and deal with it (at least my wife does - I get too frustrated to shop at Walmart...).

Is the clerk at the DMV slow and incompetent? Once again, perhaps! But, that's where you go to get your license and registration so you get in line, put up with the malarky, and get on with it!

Collectively, we can "Make Work Comp Work." Collect the premium or reserves. Pay the bills, and provide the treatment.

And we can do this without all of the phony baloney intermediaries that provide zero value to the basic equation of work comp: which is spreading the risk of financial ruin due to an occupational injury, be it employer or employee.

There's a reason why third world countries are, and remain, Third World - because Capital, Labor and the relationship between them are distorted.

As I tell the physicians that attend the AAOS course work time and time again, "workers' compensation is a political construct that obfuscates medical science to achieve a financial outcome."

Start telling that to anyone that will listen.
Posted by Unknown at 4:00 AM