Where Claimant Attorneys Go, So Too Will Defense

Whether it's good or bad, the bottom line is that when a state wants to really control medical and indemnity costs in its workers' compensation system, the state will limit the participation of attorneys, and the way to do that is to limit the fees paid to attorneys representing injured workers.

The State of Florida has proven this point succinctly, as reflected in the state Office of Judges of Compensation Claims latest annual report.

Florida in 2003 passed landmark legislation to reel in its workers' compensation costs, a system that had been spiraling out of control with double digit rates of inflation well ahead of the pace of most other states. When challenged, the provisions of the reform legislation limiting claimant attorney fees was edited by the legislature by simply excising the word "reasonable" from the attorney fee provisions, in response to the Supreme Court's interpretation of the statute.

This same phenomenon was experienced in Texas as well, where the big reform bill in that state, HB 7, severely constricted attorney fees. Lawyers went elsewhere for income and claimants seeking adjudication over benefit disputes declined dramatically.

However, if lawyers just change sides then their income isn't so drastically affected.

Here is the raw data of total attorney fee expenses in the Florida system since 2001, and proportion of those fees going to claimant lawyers and defense lawyers:

Here's a neat graph that consultant Bill Cobb did based on these numbers that more easily displays the disparity in this cost item: 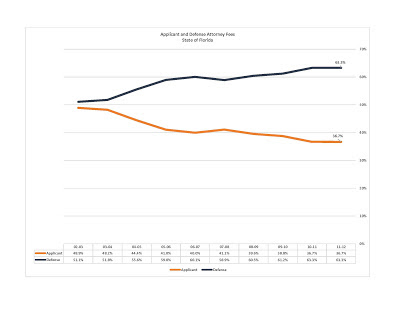 "I'm told anecdotally that lawyers are turning away clients who have cases that the lawyer perceives may have some value to the injured worker but don't have monetary value worth the efforts of a workers' compensation attorney," Langham said. "That could also be driving the frequency of the petitions that are being filed."

Curiously, then, one might expect a similar contraction in defense attorney fees, but this doesn't appear to be the case. While defense fees overall have gone down, as can be seen by the graph, proportionally spending on defense attorneys has increased when compared to the frequency of petitions for benefits filed.

Either carriers and employers are failing to realize increased efficiencies and economies of scale in declining rates of workers' compensation litigation, or they are working harder to deny claims (perhaps legitimate claims), or they are getting fleeced by the defense bar.

If you're a claimant in Florida, the prevailing wisdom is to just accept what benefits are provided voluntarily unless there is some gross underpayment or desecration of benefits.

James Fee, president of Florida's Injured Workers' Advocates, a claimant's attorneys' group, told WorkCompCentral, "There's no question that in a system that's designed to be self-executing, there's an incredible amount of money being spent against the injured worker to defend these claims. It's unfortunate with the fee restraints that have been imposed on injured workers."

Defense lawyers, don't get smug. The writing's on the wall.

Every year I go to Orlando in August to attend the Workers' Compensation Institute's annual conference. The conference is legendary for defense firm hosted suite parties that go on into the early morning hours with free flowing alcohol, food, and other expensive niceties.

Eventually these will cease. When claims go down over 50%, but attorney fees to defend claims go up 23%, carriers and employers will take notice, and the sanctity of the defense bar will also be subject to the basic rules of finance and economy.