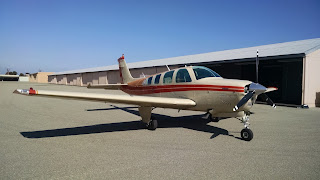 It was too smooth, I thought, as I flew down to Oceanside Saturday to check on Mom.

There I was, flying Forty One Mike along the Orange County coastline, abeam Hermosa Beach, in prefect trim and configuration: 5,500 feet, 23 inches of manifold pressure, 2300 RPM, 13.2 gallons per hour, all engine temperature readings within spec.

The air was clear, relatively cool at altitude for a mid-summer day, and surprisingly very little radio chatter indicating air traffic was light.

As we passed the Hermosa Beach pier southbound Forty One Mike sort of "burbled" in altitude by a couple feet, as though we had passed through a river of slightly turbulent air - like what would happen if we had encountered some wake turbulence.

Except there were no other planes near us to generate any wake turbulence.

I thought nothing of it until about a mile later we were in an un-commanded descent of 500 feet per minute.

"Not the autopilot again," I thought, as I disconnected it, reestablished altitude straight and level, re-connected the A/P and again noted the discrepancy.

"Something different," I said to myself - the past few autopilot malfunctions have been with roll attitude. This time it was pitch attitude.

Ugh - the prior owner had told me that the A/P was always an issue with Forty One Mike.

Seems it continues to be!

So on I went to Oceanside flying manually - at least an A/P failure is good for maintaining proficiency, but the hassle factor (and the expense) of repair is an issue. Oh well, has happened before, will happen again probably.

Saturdays at Oceanside Municipal Airport, aka Maxwell Field, are usually busy. When the weather is Ceiling And Visibility Unlimited it can be crowded, what with vacationers, sky divers, and weekend travelers - such it was this past Saturday.

Fortunately my frequency to KOKB has engendered good relations with airport management, and they instructed me to park Forty One Mike along side hangar 4 so I didn't have to hike a mile and a half back to the terminal (all of the transient parking was taken by weekenders).

After securing the plane it was off to Mom's.


When I arrived, Mom was asleep in a chair in the engagement area. She had one hearing aid in, the other was missing. The safety cord that connects the two was broken where the missing aid would be, with scotch tape wrapped on the cord.

The hearing aid that was present was in the wrong ear.

I confirmed that it was working and placed it into the correct ear.

A caregiver retrieved the missing hearing aid. I did not inspect it beyond testing for charge and it was not responding, so she took the non-responsive hearing aid to the nurses station to place in the charging unit.

After lunch I retrieved the non-responsive hearing aid from the nurses station and tied it to the broken cord as a temporary solution.

I noted then that it still was not charged.

I placed both hearing aids in the charging unit and the non-responsive unit was not charging. I then inspected it more closely and it was apparent that it was damaged.

Mom's hearing aids have always been an issue it seems. They are important. Social engagement is a huge part of dementia rehabilitation, but without hearing there is virtually no engagement - imagine trying to participate when you can't hear...

I brought the hearing aid problem to the attention of staff and management at Mom's facility - again.

At the California Coalition on Workers' Compensation conference last week a panel presentation on medical marijuana warned that "it was coming" - Federal rescheduling from Schedule 1 to Schedule 2, meaning that workers' compensation payers will need to have a strategy in place to deal with a drug that is of unclear objective medical benefit.

There are ancillary issues too, of course, such as how to tell when one is "intoxicated", all of the various strains and names, standardization of dosage, distribution, overdosage, etc.

Let's be real about this entire debate - medical efficacy of marijuana is highly suspect. It may help some people with some symptoms, but so does alcohol.

Alcohol has long had some medical benefit - it's used to disinfect, to help with insomnia, and other very limited purposes and in varying strengths and blends.

But alcohol is also a hugely popular recreational drug that used to be completely outlawed. Now it is a large source of taxation revenue for government.

Qualifying for, and obtaining medical marijuana is a complete joke. It's basically legalized for "recreational" use except the buyer has to go through a couple extra steps to get it. There's pricing consistency, home delivery, fancy packages ... and lots of money involved.

If you want weed, you just have to go through the process and pay some money. It's not a daunting task.

What is going to drive the marijuana bus is money, and ultimately the government will not be able to resist.

Big tobacco is in on the game, and states are starting to wake up to the wind fall as well. Eventually the federal government just won't be able to "say no."

Marinol is the real medical marijuana. It is controlled in its production and distribution. Its efficacy has been tested. There are warnings and indications for its prescription.

If marijuana is to be smoked or eaten, then it is of questionable medical efficacy - and that's the bottom line.

New Mexico is forcing payers to reimburse for marijuana that's smoked. Minnesota is putting together a fee schedule.

Whatever - eventually a standardizing body will issue model regulations, medical guideline writers will author use restrictions, and the pharmacological benefits will be controlled.

And we'll still have issues with it - because people will, just like alcohol or any other drug, understate their consumption, dismiss the effects, and ignore the hazards.

I'm taking Forty One Mike into the shop this week. The auto pilot will be removed and I'll fly around for a couple of weeks by hand until the repaired unit returns with some new transistors and capacitors (remember, that thing was built 35 years ago!).

And I'll have the hearing aids shipped off for repair or refurbishment. Mom will walk around unhearing, disengaged, more deep into her little confused world for a couple of weeks, unable to really communicate other than smiling, nodding and repeating "what did you say?".

Eventually Forty One Mike will have an operational auto pilot and Mom will have functioning hearing aids.

Eventually this medical marijuana issue will be fixed too and we'll move on to the next issue.
Posted by Unknown at 4:38 AM