A funny thing happened in my travels yesterday.

It was reported that California claim frequency in the last measurement largely ameliorated and started reversing trend, albeit still growing compared to the rest of the nation.

The Workers' Compensation Insurance Rating Bureau's Actuarial Committee, the folks that crunch carrier supplied data to figure out things like recommended rates and for prognostications, said that claim frequency in the first nine months of 2014 grew at an annual rate of 0.9%, compared with an increase of 3.9% last year.

The greater Los Angeles area continues to fuel frequency, which is insurance geek terminology for the amount of claims.

“If you (take Los Angeles) out of the picture, California actually looks pretty close to the national numbers,” WCIRB Actuary and Vice President Tony Milano said in a presentation last Wednesday.

Milano said the committee didn’t identify any one industrial sector in the Los Angeles area pushing claim frequency, but that the trend appears to be coming from all sides. 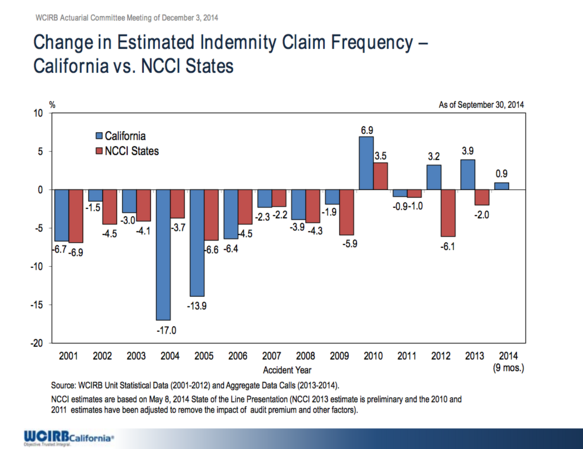 The WCIRB said part of the increase is the recovery of the construction industry - a high hazard occupational group - as house building and the economy improved.

Also going up are the agriculture, mining, entertainment, hospitality and manufacturing sectors.

No other state has such a diverse economy and accounts for as many risks.

That entertainment and hospitality claims are increasing may be a signal, again, of a positive economy, though of course this doesn't exactly explain why the Los Angeles area bucks national trends.

According to reports, there is a corresponding increase in cumulative trauma injury claims, and carriers are denying those more aggressively.

Which also might explain the increase in attorney involvement in California claims - as I wrote yesterday, the usual reason a claimant seeks legal help is because someone on the other end of the claim said, "no."

The WCIRB reported that employers and insurers denied the compensability of injuries to all claimed body parts in 66% of cumulative cases last year, compared with 57% in 2012, 41% of which were from terminated workers, compared with 38% in 2012.

In fact, the Workers Compensation Research Institute found in 2012 that about a third of all California applicants hire legal representation.

The WCIRB Actuarial Committee showed that 81% of cumulative injury applicants used lawyers in their cases.

And the how and when data is gathered, crunched and then reported as statistics distorts the picture a little bit. As Dave Bellusci, Chief Actuarial for the WCIRB, said, "These are often added late, they’re typically litigated, they’re just a different animal and they’re a big issue in California."

In the final analysis, though, my travels (see beginning) had nothing to do with the WCIRB report or my consumption of the news. It was just an easy way to open this post.

Which is another way to say that the news isn't terribly disconcerting because, other than the Los Angeles area, California trends just like the rest of the nation.

Why Los Angeles is so special is likely fodder for another study, another report and another post.
Posted by Unknown at 4:11 AM