Golfing To A Resolution

The Workers Compensation Research Institute has published a study reflecting that California's medical-legal process is more expensive, by quite a bit, that any of the other 15 study states, which includes some of the bigger players such as Florida and Texas.

Here's some of the basic conclusions (but don't rely on these, you should purchase the study to get the full picture):

That growth rate exceeded the average among 15 other study states, including Illinois, Florida and Texas, WCRI said.

This of course is not the whole story. For instance California requires payment to applicant attorneys fees for attending depositions of their clients, in addition to the fees that are paid to defense attorneys for conducting the depositions.

In the WorkCompCentral story about the report this morning, Rui Yang, author of WCRI’s report, said that one of the reasons may be that California's processes are more complicated than those used in other study states.

Below is an excerpt from the WorkCompCentral 2014 Flowchart that highlights the medical-legal process for resolving disputes concerning only disability questions and some other disputes other than treatment (which are now the purview of Independent Medical Evaluations). 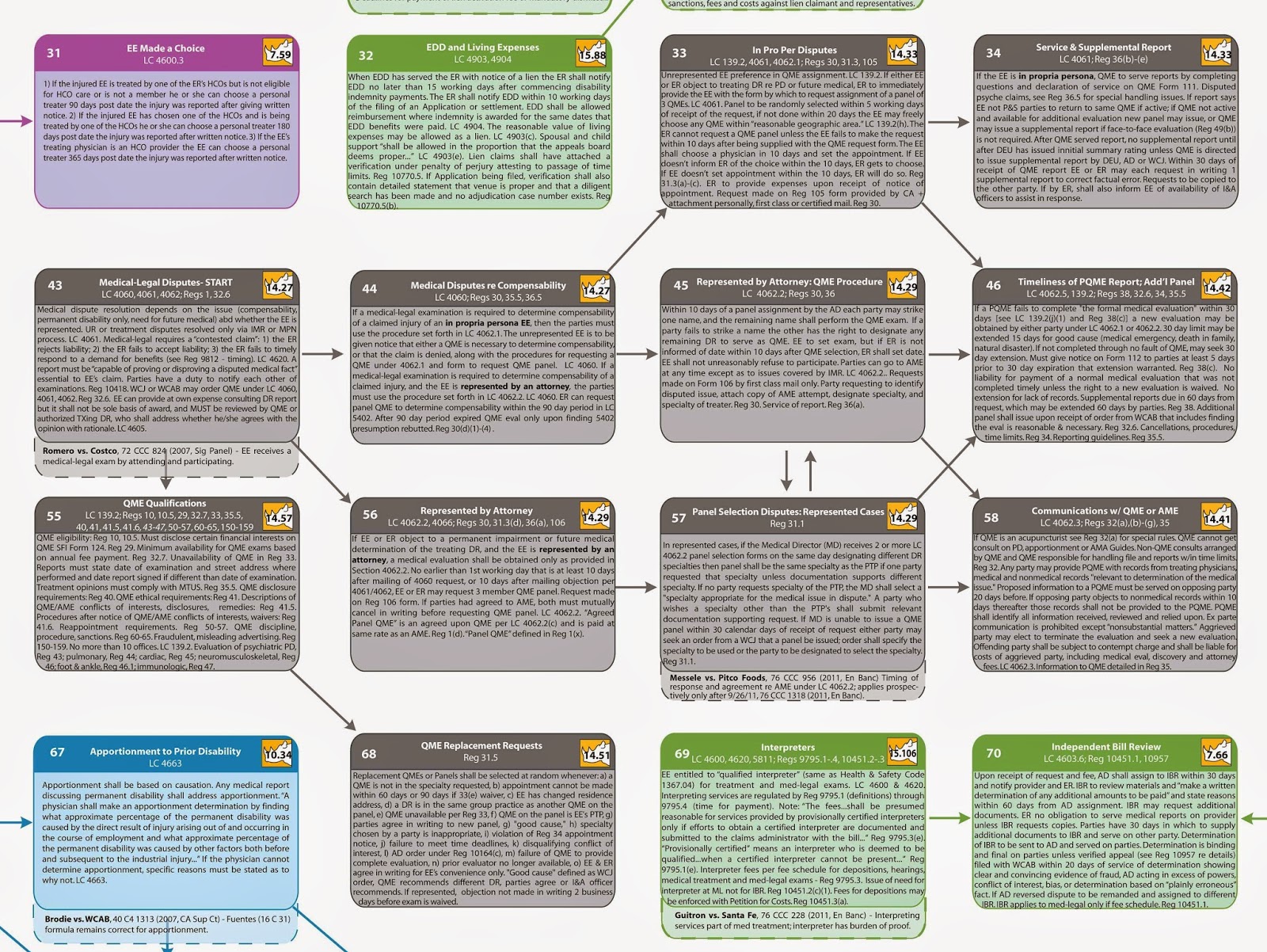 Frankly, to make this process better graphically literate it should be broken down into several more steps, but there's only so much room on a piece of paper that is 3 feet tall and 4 feet wide...

I haven't seen any other state's medical-legal process graphically depicted so I can't say whether California is more or less complicated than any comparison state, but remember that the California system has evolved substantially in the 30 plus or so years I've been around work comp.

Which brings me to golf.

Yesterday was the Pepperdine School of Law 9th Annual Golf Tournament held at the Calabasas Country Club. I have attended this annual event for the past five years with my closest law school buddies.

Other than the complication of keeping track whose drive qualifies, the rules are pretty simple, particularly since there really aren't any course monitors, and the event is designed to raise money for the school's Global Justice Program, which funds international human rights projects, summer stipends in public interest work, and students' efforts to help establish the rule of law around the world.

It's a noble and worthwhile fund raising tournament.

What I do is not called playing golf, but I do get lucky enough to actually hit the ball and make it go where it's supposed to go once in a while.

The rules for the shotgun start, best ball play require that at least one drive of every team member be used towards the final goal of getting to the hole.

I'm proud to say that I contributed twice to this grand effort. It took me the front nine to get "my game" and then I was reasonably consistent with my drives, but the field game was still questionable.

Honestly, the tournament yesterday has nothing to do with workers' compensation, except that getting to the goal (putting that stupid little ball into the equally stupid little hole several hundred yards away) required a team effort.

Workers' compensation is a team effort. We essentially play "best ball" in work comp claims. No one is so good, so right, so perfect that they dominate the game of work comp.
But I suspect that someone, somewhere, is going to point to the WCRI study and lobby for some changes to "simplify" workers' compensation and attempt to save money on claims, incognizant of the team effort that is required to put the ball into the hole.

We would have a very difficult time unraveling the complications put into the workers' compensation system that have become part or the processes over the past 25 years. Doing so would, I believe, just introduce more complications and issues.

California's claims processes, including medical-legal processes, are more costly than other states because we have allowed them to be by introducing new processes and other micro-management systems over the years.

The truth is that in most instances we have failed to use "best ball."

If the problem is complications resulting in higher costs, the answer is not more complication. The answer is figure out how to get the ball to the hole using the best efforts of everyone involved.