By now you've likely heard of this claimant fraud case as reported in the San Diego County News.

Yolandi Kohrumel, 35, went to work for Staples about 10 years ago. After three months on the job she claimed a box fell on her big toe and broke it.

She received treatment and benefits.

An EAMS search on her claim reveals wrist, back, lower extremities, nervous system and "other body systems" claimed. The party service list is filled with very familiar names to those who do workers' compensation litigation in Southern California.

Eventually Kohrumel even got approval for 24 hour care, provided for, of course, by relatives - her husband at first and then her father.

You get the picture. Claim out of control. Which means either something is REALLY wrong with this lady, or it's fraud.

The claims administrator, ESIS, followed the law and did what it could to dispute elements of the claim that didn't add up - such as the 24 hour care provided by her South African husband who did not have a work permit (so dad stepped in to "provide care").

Surgeries, pain pills, lots of doctors, crutches, wheelchairs, lots of TTD payments. She even convinced the claims administrator that she needed a bigger place to live for her wheelchair access and the administrator went for it.

Well, that became Kohrumel's undoing because the movers noticed that she was helping out with boxes, lifting, moving about unrestricted, without her wheelchair, without assistance.

The movers told ESIS, which arranged for further investigation.

When the district attorney's office finally got around to it, a search of Kohrumel's residence came up with 20 boxes of unused prescription medication.

She pleaded guilty to 8 felony counts. Her husband copped to 3.

This was after 10 years and over $1.5 million in benefits.

Before anyone reading this gets cavalier though, consider that no one in my opinion should feel good, or smug, about anything in this case whatsoever.

Kohrumel didn't just stick it to ESIS or Staples, she and her compadres stuck it to everyone who works in this system and every injured worker that makes a claim in this system.

Every single claimant gets hurt by this case. This is the kind of case that ruins the benefit of workers' compensation for all workers. Voters Injured At Work should be livid about Kohrumel and her fraud - this is the kind of case that makes claims adjusters scrutinize every claim, causes benefits to get delayed, and makes it extraordinarily difficult for claimants with legitimate injuries and impairments to move on.

Every single workers' compensation attorney should take shame in this case. Not just applicant attorneys, but defense attorneys too.

Cases like this make the jobs of injured worker representatives more difficult because of the suspicion that gets generated whenever a claim wanders outside the initial injury claim, and languishes for years of disability and outsized treatment.

The average Working Joe will see this story in the news and point to it as typical of workers' compensation - that every claimant is on the dole, trying to cheat the system. How can applicant attorneys effectively advocate for their clients in the public's eye when the public perception, fueled by the story of Kohrumel and her contributors, tells the rest of the world that work comp is just a fraud game?

SB 899 and more recently SB 863 are directly attributable to cases like this one. Want to stop "reform"? Be more vigilant in screening the kind of cases such as Kohrumel to make sure they don't get to the level of becoming posters in the Post Office.

And the defense has no better place in this game. Talk about hood-winked. Where's the motivation to get to the truth? Why defend the case in the first place if we're just going to hand out one and a half million bucks?

The physicians in this case bear culpability - big time. Shame on them for perpetrating this fraud, for continuing to fulfill prescriptions, find disability, prescribe beds, wheelchairs, etc. They have first hand knowledge of the actual physical status of the claimant. Just because Kohrumel said she was in pain didn't mean that she had to be believed. The MTUS is there for a reason...

And what of the administrative judicial system? Sure, thousands of cases come before the workers' compensation judge annually - but diligence in examining claims for reasonableness comes down to judicial enforcement. At some point the judge has to ask whether any of this makes any sense as opposed to just moving things along.

I know - everyone in this game did what they could do within the scope of their duties, knowledge and liability within the system.

It's way too easy to say that "it's not my job" or responsibility - that if a claimant is being fraudulent it's not the job of her representatives, her doctors, or those scrutinizing the claim, to blow the whistle or take extraordinary precautions or actions to prevent or limit such fraud.

I think workers' compensation 98% of the time for 98% of claimants works. But just like the general rule in marketing - it takes only one bad situation to ruin a brand.

In this case, the brand that is Workers' Compensation takes a huge hit.

How can a system with questionable credibility survive?

Applicant attorneys get a bad name from cases like this - sharks only out for one thing: money at the end of the day. And this case, had the claimant not been so greedy, probably would have paid off handsomely...

The doctors treating by the procedure code polished the cash register every time Kohrumel wheeled into the examining room.

I'm sure the defense file was huge - after 10 years of activity, my guess is a banker's box of records. And probably about $50,000 worth of billings...

The judges before whom this case came, with a full docket, have an interest in moving things along ... stamp that status sheet "continued."

The employer takes a hit (though self insured), the administrator takes a hit (would have, should have, could have), and frankly the district attorney's office takes a hit (why did this have to be a $1.5 million fraud for there to be any interest?).

Every single one of us bears responsibility for Kohrumel. We can blame her and say it's a shame. We can decry fraud and say she got what she deserved (180 days in jail and restitution - big deal, she'll never pay any of that back).

Or we can band together and tell the policy paying employers we won't let this happen to you. And we can tell the claim making employees that we won't let Kohrumel ruin your benefits.

The workers' compensation case trial is set for 9/12/2013. My guess is the disposition will be OTOC... 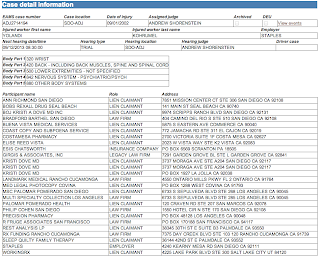 Email ThisBlogThis!Share to TwitterShare to FacebookShare to Pinterest
Labels: fraud