What do you see?

Lots of employment opportunities for lawyers, primarily those on the insurance/employer defense end.

Some firms are even taking out full display ads for recruitment days and other practices that are typically the province of Corporate America.

Indeed, this does appear to be anecdotal evidence of a larger trend in California workers' compensation - as recent Workers' Compensation Insurance Rating Bureau data shows, spending on lawyers this past year totaled $1.2 billion and has been increasing at a dramatic rate, particularly for defense legal fees.

That's a lot of legal fees, which represents a lot of benefit contestation.

Break it down even further, though, and the anecdote of job ads for lawyers becomes even more salient - defense fees are double what applicant attorney fees are.

Here's the graphical depiction based on the WCIRB numbers: 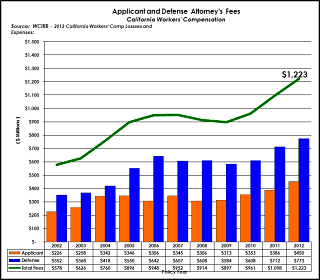 The chart is interesting in a couple of aspects.

Note that following the 2004 reform, SB 899, defense fees skyrocket from $368 million in 2003 to nearly double at $642 million in 2006, while applicant attorneys, whose fees are largely pegged to permanent disability indemnity, lost some ground, but essentially remained flat.

Things stabilize a bit after 2006 until 2011 when the lawyers on both sides, start taking home a bit more pay, such that 2012 legal fees are double what they were in 2002 for both defense and applicant.

Either a lot more people are getting hurt, or a lot more disputes on benefits are being filed, or there is a surge in hourly rates and/or PD, or a combination of everything together is conspiring to increase this cost component.

We know from other WCIRB data and information from other sources that there was a spike in frequency in 2010, but that has largely normalized, so any increase in the number of people getting hurt doesn't explain this phenomenon.

Hourly rates for defense work has increased, but so has legal billing controls at the carrier - so we can't lay the blame on any price gouging or over-billing. There is just too much oversight on defense billing for the carrier/employer community to get taken by legal fees.

There is some compelling evidence that reform drives attorney fees, in particular defense fees. This is pretty clear from the spike following the 2004 reforms which provided fertile grounds for denying claims of all sorts. And it appears that such is the case in 2012, likely tied to those pesky lien claims - many defense firms have their own specialized lien claim defense departments.

The proponents of SB 863 were looking for about $500 million in savings - well, seems to me that money is right there being paid to defend against paying injured workers and their providers.

I'm not just picking on lawyers here - remember that I am cut from the same bolt of cloth having done primarily defense attorney work for 18 years.

But everyone in this system has a contribution to the cost of the system, and "reform," or perhaps more accurately, "deform," seems to do more to increase expense, burden and costs more than it resolves.

Make the system a game and the players will game the system, regardless of whether the perception is good, bad or neutral.
Posted by Unknown at 4:43 AM