Controversy over California reform, SB 863, will continue for years, and it is of no surprise that cost/benefit analysis will differ considerably until matters settle down, operational issues are finalized, and loopholes are identified and stabilized.

This last part of the equation may be a surprising statement to some - the truth of the matter is that loopholes will become known, exploited, but eventually will stabilize - meaning that the volume of cases where loopholes can be exploited will become a known quantity by which actuarial analysis can factor in a price.

Here's why AON says costs are going to be higher than anticipated:

All in all, Aon believes the permanent disability benefit increase in SB 863 will drive costs up by $982 million in 2014 while the cost-cutting provisions will produce net savings of only $631 million, increasing system costs by a net of $351 million a year beginning in 2014.

State Fund's projections when SB 863 was in the final draft stages showed a net savings to the system of about $540 million.

Perhaps State Fund has reason to be optimistic - it's surplus has grown by about 20% since 2007 to $5.9 billion, yet its premiums have shrunk about 54%:


Note that the ratio of surplus to premium has grown nearly 163% since 2007. To put this information into graphical context, here is a chart showing how State Fund's surplus growth compares to premiums taken in: 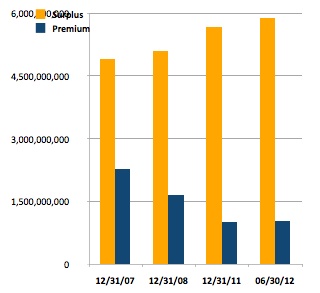 So, perhaps there's reason that the State Fund is optimistic about SB 863 - when rates were going up surplus increased well beyond the needs of policy holders; it's got the cash now, accumulated over the past several years despite declining premiums, to decrease rates AND pay back another dividend anticipated at $100 million.

Which by the way is paid to 2012 policy holders despite the fact that the surplus was built upon the premiums collected by employers prior to 2012 which may not be policy holders in 2012...

In other words, State Fund is sitting on $4.5 billion in excess surplus. All this they got from the unfortunate employers that couldn’t get coverage (in the main) from the private carriers during years when blame was being laid on industry vendors and attorneys for increasing costs in the system.

The $100 million (if it does get paid out) will be from a combination of current and past years. Yet, it only goes to the 2012 policy holders.

Let me wrap this all up - the estimated costs and benefits of SB 863 are basically only as good as the local fortune teller - the WCIRB, State Fund and other supporters are telling California business what they WANT to hear (with due respect to the WCIRB, the vote for no increase in rates was split and the majority of carrier representatives voted against the motion). And the State Fund is going to back up that prediction with cash back to current policy holders.

Hey, I'm in favor of dividends when warranted. Certainly if surplus is excessive then money needs to be returned to employers. But the dividend should go to those employers that paid into the surplus retrospectively.

And let's face it - I don't care what anyone says about the WCIRB's recommendation. The motion for no rate increase was made by State Fund, and looking at the numbers it's no wonder. State Fund is in a position to take on whatever SB 863 dishes out, regardless of whether its projections, WCIRB's projections or Aon's projections are accurate.

Either way, my only conclusion is that the politics of SB 863 go way beyond the Governor and the Legislature. Who benefits? Certainly not employers that paid too much into the system prior to reform.
Posted by Unknown at 4:54 AM