Reform is About the Trees, Not the Forest

Workers' compensation reform is in the air in about a dozen states right now, including the Federal Employee Compensation Act (FECA) system.

Particularly in California, the biggest work comp system of all, this wave of reform is spurred by two disparate goals: reduce costs and increase indemnity.

A good friend of mine from the industry accurately described, in my opinion, the basic element that leads to the octennial revision of workers' compensation laws: "Everybody in this system is out to get all they can," he said to me, "so much like the criminal system, both sides need to do their best to win, and if the system is designed right, and the Judges do their jobs, justice should be done."

I think my friend is absolutely correct in the first instance - everybody is out to get all they can.

This includes of course injured workers that seek to increase indemnity and liberate the medical dispensation system. Employers that seek to pay as little as possible for coverage (and some seek not to pay at all). Insurance companies seeking to maximize the profit out of the cash flow exchange that work comp provides. Vendors (including medical providers) that seek to capture all of the dollars that an injured worker throws off them. Brokers who like higher premiums because that means bigger commissions. The list goes on.

There are so many myriad businesses that specialize in the process of taking a work injury from start to finish that if this process were described to a logistics specialist their eyes would glaze and their disbelief would turn to disinterest as they go back to the design of the latest assembly line system.

I struggle with how workers' compensation can be tamed - there are so many moving parts it is seems almost impossible to quantify. The politics of so many interested groups must be overwhelming for legislators who have no idea of the monstrosity that has evolved from such a simple concept of spreading the risk of work injury to the entire employer population so that the 1% of the employment force that does get hurt at work has a safety net.

When I was still a naive defense lawyer and couldn't sleep at night (I'm not as naive now as I was then, and I'm not a defense attorney any longer, but I still don't sleep) I came up with the concept that the workers' compensation system could be flowcharted - that there was some logical distribution of the various claim elements that could be followed if one took the time to study the statutes and regulations. It seemed to me that things sort of fit together and that a better understanding of the system could be had if it was represented graphically.

Besides that, it would be a tremendous marketing tool for my law firm.

So I spent hours very early every morning before taking off for my first court appearance working on a flowchart.

This took a lot of time initially as I would document a process, put it where I thought it belonged in the flow of things, then would have to incorporate some seemingly contradictory provision into the pattern.


I think that first flowchart of the California work comp system, which I published back in 1997, took me about 80 total hours to put together. I called it the California Workers' Compensation Flowchart.

Much to my chagrin, this was the start of an annual exercise - and frankly one that I don't relish - and each year has assumed in the title the year of the legislative and regulatory changes implemented.

I think you would be very surprised at how SIMPLE those early Flowcharts were compared to today's monstrosity! In 1997 I thought the system was complex. But 2004 introduced so much more complexity into the California system, and judicial interpretations of that mess of a law raised the bar even further, that this is what we have now: 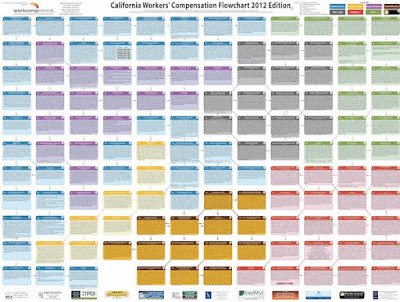 I know you can't make out the details; I'm not sure you want to. Trust me that while this looks complex, there are details that I don't include - how granular can one really get? In California work comp, one can get VERY granular...

I had the president of an insurance carrier tell me once why he usually ordered up a half dozen of these posters at a time - because when he went to big clients for a review and was challenged with why the premium was so high, he would whip out this poster with all its complexity and tell them, "this is why."

The reason I bring this up is because the present talk of reform focuses on granular tweaks - lots of small items intended to wrangle out some sort of "savings" so that another small part of the system can be increased. It's the proverbial trees trumping the forest. One tree seems diseased so treatment is applied, but in the meantime the rest of the trees, to which the disease is spreading, is ignored, until the whole forest falls.

For instance, everyone relies upon the data published by the Workers' Compensation Insurance Rating Bureau (WCIRB) but no one challenges that this data is even valid or accurate.

As an example, WCIRB relies upon reserve data from the carriers to make actuarial pronouncements.

My good friend has an acquaintance who just quit the State Fund as an adjuster. She said she just couldn’t take it anymore. “It” meaning the employers calling her and complaining about her reserve practices, and the vendors calling and complaining about unpaid bills. The two shouldn’t happen at the same time… if you aren’t paying your vendors then your customer should be happy that you're saving them money.

The answer to the dilemma lies in reserves - management provides all kinds of cheat sheets and charts showing what she should type in on various types of body parts in different types of cases, and even based on which physicians are involved. She doesn't really know what she is inputting or how it affects the premium or management of the case - she follows instructions for processes that were devised by people higher up the food chain. She makes educated guesses at the data based on these forms and formulas, but in the end it is all guesswork.

This guesswork reserve data is then communicated to the WCIRB at various points during the year and is used as a part of the actuarial prognostications for generating rate recommendations, even though it is not accurate data.

Kind of like "end of the world" predictions - when the event doesn't happen (remember Y2K?), well the scriptures (or whatever drove the prediction) were misinterpreted... Perhaps it just isn't reliable information after all...


This is why the WCIRB can come out with a proposal for a big rate increase at one point in the year and at another point "adjust" it downward or upward, depending upon what new claims data based on reserves comes in the door.

Reform can't be about the trees - it has to be about the whole forest. The concept of workers' compensation is a good one. Along the evolution of the system the concept got lost. Trees were being fixed but in the meantime the forest has not been managed and we are dealing with overgrowth and high density forestation. Eventually a wild fire will burn down the forest and take a few structures and lives along the path of destruction.

I've said it before, but I think it bears repeating - reform can not be just about the benefit delivery system. That is only one grove in the forest.
Posted by Unknown at 4:45 AM